By LCG Bees No Comments 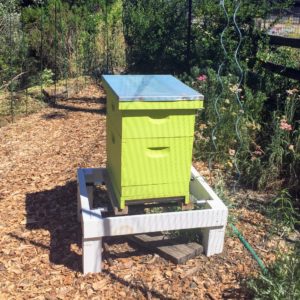 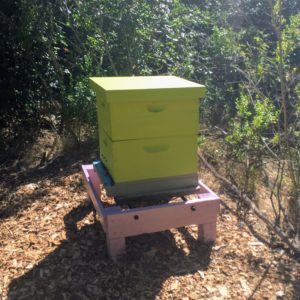 This spring, two honeybee colonies were welcomed into the Garden.  Both colonies are doing well.  The honeybees originated as swarms that were donated to the Garden by members of Mt Diablo Beekeepers Association.

So—what exactly is a swarm and why does swarming happen?  In Lamorinda, ‘swarm season’ runs from March to early June, when food–nectar and pollen from fruit trees and flowers–is plentiful.  An overwintered colony’s hive can become so packed with larvae and food that the queen has no space to lay eggs.  She and her workers begin the swarm process:  new queen cells are built and the old queen goes on a diet so she can fly more easily. When the queen cells are ready to hatch, the old queen and about half the worker bees leave the colony to find a new home.  A new queen emerges, matures, mates with perhaps 9-13 drones and begins her career as ruler of the colony.  This is the way honeybees have reproduced for thousands of years.

Beekeepers place great value on swarms.  This is because, in the 21st century, with the extreme pressures on honeybees from non-native pests, viruses and diseases, a colony that’s healthy enough to become overcrowded and swarm possesses some hardy genes within its DNA.  Those are the honeybees we want in the Lafayette Community Garden:  bees that have adjusted to our micro climate, dealt with pests and diseases and have found a way to survive.

The Lafayette Community Garden provides a beautiful environment for honeybees.  Special thanks go to Jimmy Hill and Michael diPretoro for clearing weeds and laying mulch around the hives.  The Sage and Labyrinth colonies continue to build up their numbers and forage for food.  With observation, attention and intervention when needed, we hope to keep your bees thriving.  Please know that I’m happy to answer any question you may have and will respond in future editions of the Newsletter.